Beta (β) is a measure of volatility, or systematic risk, of a security or portfolio in comparison to the market as a whole. (Most people use the S&P 500 Index to represent the market.)

Beta is also a measure of the covariance of a stock with the market. It is calculated using regression analysis.

You can think of beta as the tendency of a security's returns to respond to swings in the market. For example, if a stock's beta is 1.2, then it is theoretically 20% more volatile than the market.

What am I looking at?

Alpha:
The point of intersection with the y-axis.

Standard Deviation of Error:
The degree to which an individual probability value varies from the distribution mean.

Standard Error of Beta:
A 67% confidence level (or one standard deviation from the mean) that this: Actual Beta = Raw Beta +/- the standard error

Number of Points:
Indicates the number of observations used to calculate beta (the more, the better).

Finding Beta of a Stock

Enter this command to look up the beta of a stock:

Example: The screenshot shows the result for the beta of Goldman Sachs. 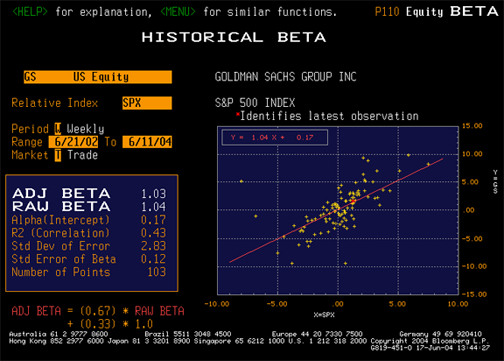 Using the default settings, Bloomberg performs a regression of the historical trading prices of the stock against the S&P 500 (SPX) using weekly data over a two-year period. Depending on the security, you can often find data for the past 20-25 years!

Bloomberg reports both the Adjusted Beta and Raw Beta. The adjusted beta is an estimate of a security's future beta. It uses the historical data of the stock, but assumes that a security’s beta moves toward the market average over time. The formula is as follows:

Differences between Beta on different resources

When evaluating the different options for finding beta, you may be wondering: Which one is right?

There is no right answer and there are several different methods to calculate beta. You must be aware of how the different resources calculate beta and decide which one is right for you.

The following list highlights some of the major differences: