Guide to the History of Science Collection at L. Tom Perry Special Collections

About the History of Science Collection 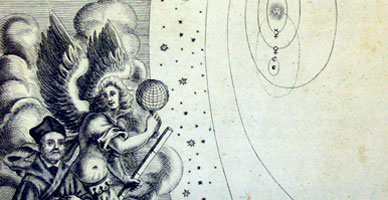 The strength of the History of Science collection consists of astronomical texts from the period between the establishment of Tycho Brahe’s observatory on the island of Hven in 1576 and Isaac Newton’s death in 1727. Special Collections has made it a priority to collect astronomical works because of the connections between the study of the stars and religious thought during the seventeenth century.

The centerpiece of this collection is the Library’s millionth-volume acquisition, the manuscript of the fixed-star catalog of the Prussian astronomer Johannes Hevelius (1611-1687). To commemorate this acquisition in 1971, Special Collections also collected and exhibited all of Hevelius’s printed works. In addition, the History of Science collection includes many of the landmark works in the history of astronomy including Tycho Brahe’s Astronomiae Instauratae Mechanica, Johannes Kepler’s Astronomia Nova and Giovanni Battista Riccioli’s Almagestum Novum.

The History of Science collection has expanded beyond astronomical works to include an almost complete assembly of the published works of the Jesuit Athanasius Kircher (1602-1680). While the University originally collected Kircheriana because of its long-standing interest in Egyptology, the breadth of Kircher’s work also covers subjects important to the history of science including: magnetism, light, plurality of worlds, plague, volcanoes and a host of other natural phenomena.