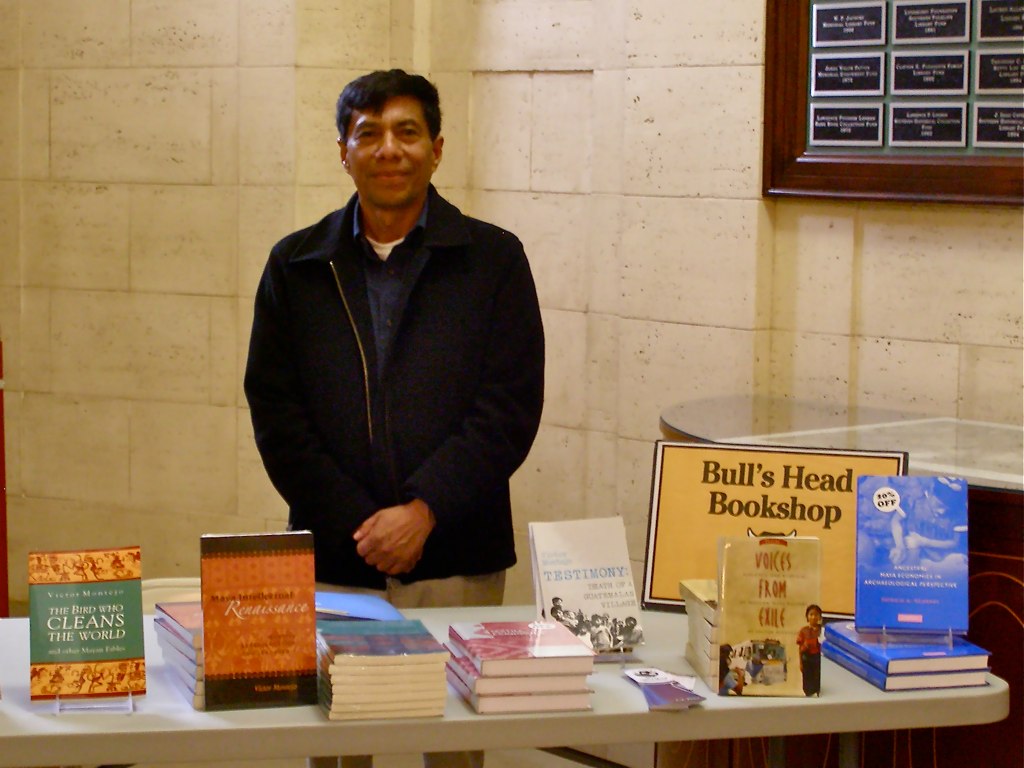 Víctor Montejo is a Jakaltek Maya and an internationally recognized author, scholar, and intellectual.  As a young school teacher near his native village of Jacaltenango, Montejo published the text "Alerta Maya," and found his own life in danger after soldiers murdered his brother Pedro Antonio. An American writer and translator who had been Pedro Antonio's friend, Wallace Kaufman, suggested that Montejo write a short book that the could be sold in the U.S. and then use the funds to fly to the U.S. The plan worked and Montejo flew to North Carolina, where he lived with Kaufman while learning English and learning how to drive. While in the United States, Montejo and Kaufman met people who formed a network of friends that would help Montejo bring his family out of Guatemala in a clandestine operation, and begin his academic career. In the United States, he received a PhD in Anthropology from the University of Connecticut in 1993.  He later taught at the University of California-Davis in the Department of Native American Studies, eventually becoming its chair. In 2004 he returned to Guatemala to serve first as Ministro de Paz [Secretary of Peace] in the cabinet of Guatemalan president Roberto Berger, and then as a member of Guatemala’s National Congress from 2004 to 2008.  He was a Fullbright Scholar in 2003. He formally retired from UC-Davis in 2011, and currently lives in his hometown of Jacaltenango (Xalja’ in his native language, Popb’al Ti’), where he continues to write. Montejo is the author of numerous books and articles that focus on the Mayan experience in Guatemala and abroad, immigration, human rights, and Native American beliefs and worldviews.

The Bird Who Cleans the World and Other Mayan Fables (folklore, English, 1991)

Popol Vuh: A Sacred Book of the Maya (edition for children, English, 1999)

A major emphasis in Montejo’s work is the recuperation of Mayan oral history, beginning in 1984 with the publication of a bilingual English-Spanish version of El Q’anil.  The selections presented here are from his trilingual edition of this same work published in 2001 as El Q'anil: Man of Lightning. A Legend of Jacaltenango, Guatemala, in English, Spanish, and Popb’al Ti’.  The story, preserved by the Jakaltek elders and passed down from generation to generation, relates the tale of one Xhuwan Q’anil, who became a q’anil, a man capable of transforming himself into lightning to defend his people from an invading army.  The figure of the man of lightning appears in the mythologies of many indigenous peoples of Mesoamerica, but for the Jakaltek Maya he is their founder and special protector, and there is a mountain near Jacaltenango called Q’anil where Xhuwan Q’anil is believed to still reside following his success in battle.  About this story, Montejo writes, “it is not simply a story but rather a model of virtues that portrays the thoughts and feelings of the Jakalteks over time” (p. xv). Montejo further explains,

By writing El Q’anil, I believed I would be contributing to the rescue of the cultural

legacy of my ancestors and maintaining the Maya creativity, which needed to be

expressed.  Now, El Q’anil has passed from oral tradition to written text and serves as a

peoples of the Americas. (p. xxix)

“Reverently, I wish to commence, on the bank of the Blue River, the narration of the beginnings and origin of my people, which is also my own origin, and the life of all our generations.” (p. 5)

“The past is the nourishment and honor of the present. Let us walk in harmony upon this foundation so that one day the history still hidden from us may be ours.  May no one be left behind, and may we all together…move forward!” (p. 8)

“Then the sky blazed with lightning, thunder exploded, and a crackling lightning bolt struck the sea, throwing back its waves and revealing the enemy.  Xhuwan and his companion followed with fury. Again and again they unleashed their lightning bolts, pounding the bloodied waves of the sea.” (p. 26)

“Up there on the peak of El Q’anil, though we do not see them, we feel their breathing, we feel them living and speaking; and when there is danger in storms, or poisonous snakes lie in wait for us in the thick trunks of the trees, then they hurl their lightning bolts, driving away the evil that seeks our lives.” (p. 29)