Music: What Are Scholarly Editions?

Every modern edition of a musical work reflects the decisions of an editor about how the music was meant to be performed. In scholarly or critical editions, the editor's decisions are based on evidence in the primary sources.

Some editors select one source that they believe best represents the composer's final intention, and follow that closely. Others take material from a variety of sources, using their own judgement when they encounter variant readings (differences) between the different sources.

Editors select one reading over another based on various criteria: is the source an autograph (the composer's own manuscript) or a copy by someone else (and how close was that person to the composer)? Is it an early sketch, or the first published edition, or a later revision? What makes the most sense given a knowledge of the composer's style? Editorial techniques and philosophies also change over time. As a result, different editions can show very different readings of a work.

Scholarly editions identify the source(s) used, and often show the sources' variant readings in an appendix or in footnotes. The editor is a scholar who has specialized in the study of that composer or repertory.

Many composers’ complete works have been published in a single scholarly edition (called a collected edition). 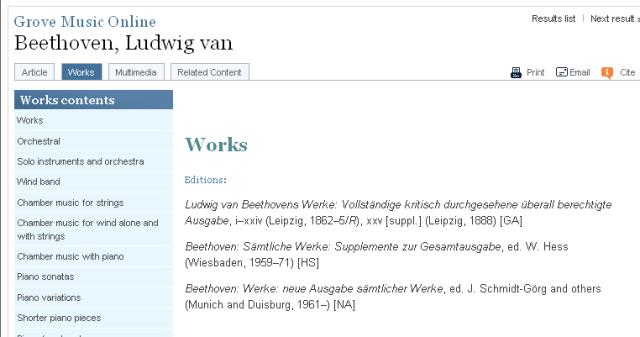 If you're looking for a specific work, its volume in the collected edition will be indicated in the worklist .

In composers' collected editions,  the variant readings in the primary sources are shown, either in the main volumes or in separate supplementary volumes.

Some of these editions are still in progress, so you may find that a specific work has not yet been published in the composer’s collected edition.

Finding them on the shelf

Composers' collected editions are shelved in the Libray under the call number M3, alphabetically by composer name.

IMSLP (browse by composer name, then look for a link to the collected edition)

Handel, Liszt, Mendelssohn: Munich Digitisation Centre (scroll through the list of collections and look for the composer's name)

"Urtext" is a German term meaning "original text." Probably the most well-known Urtext editions are the ones published by Henle (with blue covers) and Wiener Urtext Edition (with red covers).

An Urtext edition attempts to present the work with the least possible editorial intervention, usually based on a later primary source (the composer's last manuscript, or the first edition) which is believed to represent the composer's final intentions.

The Urtext philosophy has been criticized by a number of scholars. See the entry "Urtext" in Oxford Music Online.

Editions by a prominent performer

Some editions have been done by a performer known for his/her interpretation of a composer's works.

While some of these editions may not be considered scholarly (in the nineteenth century especially, performers may not have consulted the primary sources), these editions can yield valuable insights into performance practice and the reception history of a composer or work.

Performers/editors can be searched in the Library's catalog as authors.

These are scholarly editions that collect the music of a particular country, time period, or other category. They are variously called historical sets or series, monuments, or Denkmaeler (the German term).

Because they aim to preserve the entire classical musical heritage of the particular country, etc., they often contain repertoire that has not been published elsewhere. They're a good source for lesser-known composers.

Many of these editions are ongoing projects, issuing new volumes periodically. The following indexes, shelved in the Reference room, are helpful for finding specific works in these large sets:

Finding them on the shelf

Historical sets are shelved in the Library under the call number M2, alphabetically by title.

Polyphonic music of the fourteenth century

Recent researches in the music of the Middle Ages

Recent researches in the music of the Renaissance

Recent researches in the music of the Classical Era